My Latest Work #8: Best Laid Plans At the beginning of this year I promised myself that I would post every week and become much more involved in social media to try to promote my store’s patterns and products. For a while I wasn’t doing too bad. But for those who have been paying...

At the beginning of this year I promised myself that I would post every week and become much more involved in social media to try to promote my store’s patterns and products. For a while I wasn’t doing too bad. But for those who have been paying attention, you know I totally fell off the wagon mid-April. Well, there was a very good reason for that.

On April 11th my mom fell and dislocated her hip replacement. This is the second time she’s done that, and the third time she’s fallen. Of course she went to the hospital and they put her hip back in place, along with three weeks of rehab. She came home May 1st and I have been living with/taking care of her since (I flew out from CA to Chicago the last week in April). But I guess when you’re as old as my mom (92 yrs – and yes, she still lives in her own home), the medical oversight can’t stop there. The past four weeks have been a whirlwind of physical therapy, occupational therapy, home nurse visits, personal care visits, and doctor appointments. Tomorrow we go to her orthopedist, where she’s wants to get the ok to take off the massive hip brace she’s wearing. Let’s hope! 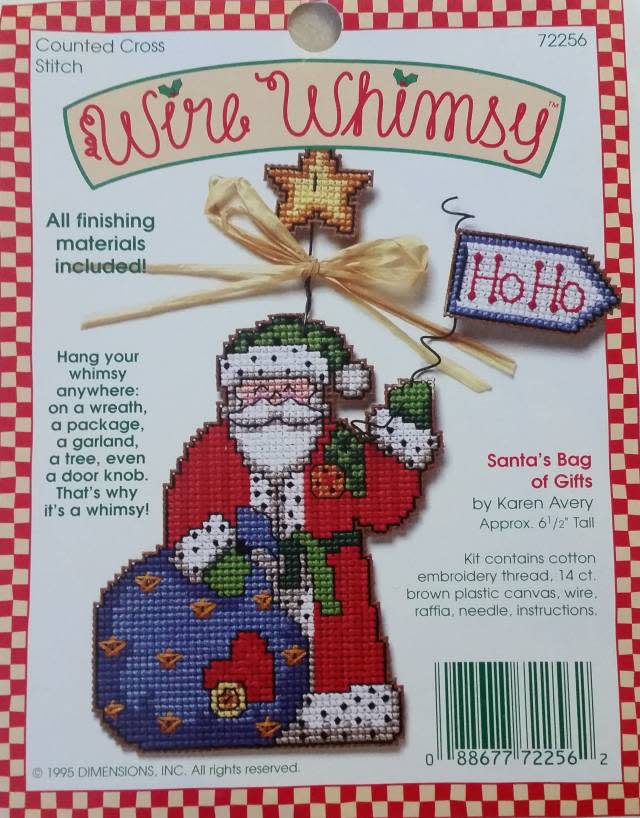 The Wire Whimsy kits are copyrighted 1995. Could it be possible I bought them THAT long ago?!! Anyway, I think I was in Joanne’s after Christmas one year and these were on sale for 75 cents each (normally $4.49), so I picked up eleven of them. They have been very patiently waiting in a box for me – with a couple of other projects (that I haven’t touched either) to keep them company. So far I’ve managed to finish the one Santa. I didn’t like the stars on his goodie bag so I didn’t include them, but I do want to put something on the bag because it looks a bit plain. I’ll figure something out, but suggestions are welcome. 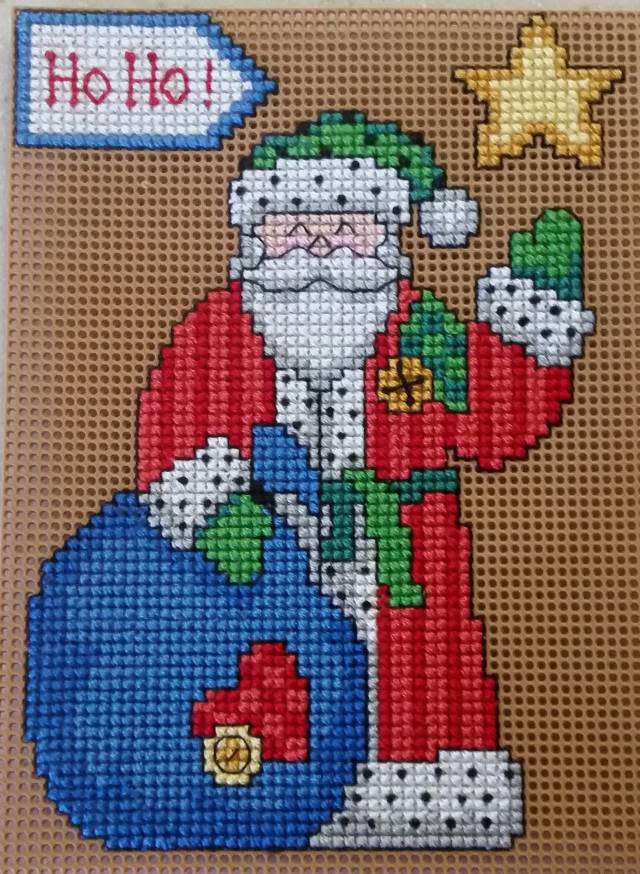 My Version of Santa

When I was packing for the trip, I wanted to bring some yarn with me but just got the hooks in the suitcase. The plan was for me to stay until Mom got the brace off (6 to 8 weeks), and packing for such a long stay is daunting! Anyway, I packed the yarn and the suitcase ended up two inches too large. If the airline wanted to get picky they could’ve charged me an extra $200. I chose not to risk it. The yarn had to be left behind, but I brought all the cross stitch ornaments.

I broke down, though. I am going through a severe crocheting withdrawal (yes, really!!!) and I couldn’t help myself – a company offered $1.99 shipping and I ordered five skeins of #1 lace yarn. It’s Lion Brand Amazing Lace, and I’m so hoping I won’t be disappointed. The reviews were good – keeping my fingers crossed. I already have at least two patterns I want to make with the yarn, so I’m ready!

At this point things are up in the air as to whether I’m going to stay here with my mom or go back to CA. Much depends on how well she can do for herself on a daily basis. My SIL has been a Godsend – taking care of the shopping and driving her back and forth to appointments – but that’s the limit for her, considering she’s still running her own family. I still have another month to go, so we’ll just have to wait and see. In the meantime, I’ll post when I can – and as always, Happy Crocheting!

View all parts of My Latest Work »

You poor thing!!! Best wishes. I think beads would be cute on Santa’s bag.

Thank you so much for the sympathy! I’m still with my Mom (after this last fall it became obvious she needed help), but we’re getting along pretty good. And I think your suggestion of beads for Santa’s bag is perfect! Thanks!